How Web Design is Changing in 2019 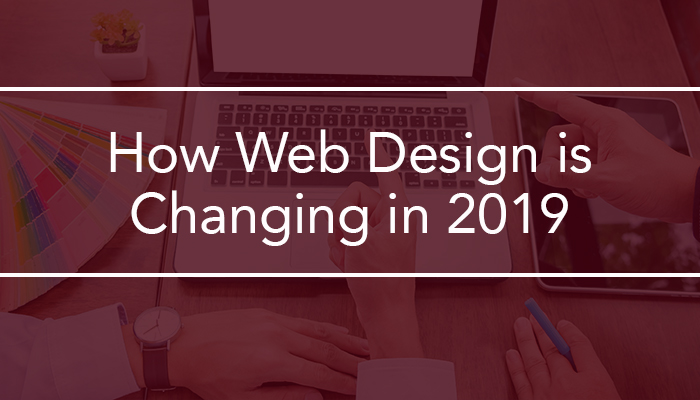 In the past year, there have been numerous advances in technology which have helped website owners connect much better with followers, exciting new styles which push the envelope of web design, and increased focus on accessibility and documentation guidelines. All these developments from 2018 have served to make the Internet a more consistent and accessible environment for users all around the globe.

If it seems like there’s a lot happening in the world of web design, that’s because there truly is, and that makes this the ideal time to take a breather and evaluate those things which have happened recently, as well as what we can expect to see in 2019. Here are some of the ways that web design will change during the coming year, and how web designers will advance those changes.

Flat web design is a kind of minimalist approach which features bright colors, lots of open spaces, and illustrations which are two-dimensional. Although it began as one of many trends several years ago, it has evolved into an approach which is close to becoming an industry standard. The reason it has become so popular is because fast-loading websites have become critical for users and for owners alike. Rather than overburdening websites with large heavy images, simple illustrations are replacing their heavier cousins in the interests of speed.

Many users also prefer this approach because it minimizes clutter and reduces ornamentation on a website, all of which allows users to focus on the important information they came for. Navigation is also more efficient when this more minimalist approach is in effect, because all web pages of the site become more agile and more easily presentable.

If there can be said to be a trend among users of the Internet, it’s that they require instant gratification when they’re searching for information. That means there’s only a brief period of time available to capture their interest, and provide them with the information they require. Animated GIF’s serve this tendency very well, because they can convey some fairly complex notions very rapidly, while also entertaining the user and drawing them in, to become more fully engaged. Since they work on virtually all mobile devices and browsers, GIF’s also have tremendous accessibility to Internet consumers.

An emerging trend in web design features much greater emphasis on designing within the framework of a set grid. Using a grid makes it easier for designers to maintain consistency and alignment throughout the design process, and that in turn makes it much easier for developers to create it. While there are a large number of web designers who prefer the grid approach, some have already begun to break outside that grid, so as to experience greater freedom with their concepts, and to create an additional hierarchical level on a web page.

The advantage of this additional hierarchy, is that it encourages the user’s eyes to scroll down the page and it draws them toward the actionable sections on your website. Both these approaches are trending strongly, and you can expect to see a lot more of both in this year’s web designs.

As mentioned above in the section on flat design, web design in general is moving strongly toward the mindset that less is more, and that will cause a great deal more whitespace to creep into web design. Designers now consider whitespace to be valuable breathing room situated around important elements on a given web page, and the whitespace actually serves to highlight or feature those elements more than they normally would be. Using more whitespace also improves the readability of your pages, and makes it much easier for users to pick out the information they’re looking for and assimilate it.

It has become a featured element of many websites to have conversational bots which are capable of machine learning, and actually carrying out useful basic conversations with users. Many companies have already enjoyed considerable benefit by having conversational bots positioned on their websites.

Users will receive instant responses rather than having to wait for a human to become free, and when trying to establish which department a call should be directed to, conversational bots are extremely efficient. There is also a good deal of efficiency gained by handling incoming calls with conversational bots, because there’s less time necessary between calls, and the calls tend to be handled more quickly by chat bots than by humans.

Some companies have invested a great deal of resources into developing a software system of reusable components which are all subject to the same set of constraints, principles and rules in web design. Many web design teams are now using these design systems to great effect, having achieved tremendous efficiencies and standardization benefits. Using these kinds of design systems, teams of designers have been able to reduce inconsistencies in their work, as well as to significantly speed up the overall process of design.

One of the major trends that will gain traction in 2019 is designing websites for all individuals, including those with disabilities. Currently there are a great many websites on the Internet which have been designed with barriers that make it hard for people with disabilities to access the website. It is likely that the Web Content Accessibility Guidelines will soon become enforced more stringently, and that will make it very important that your website is accessible to everyone.

Given the fact that the Internet is an open source of information which everyone should be able to take advantage of, it’s only reasonable to expect that even those with disabilities should have full access to all sites. Expect to see web design this year which pays much more attention to universal accessibility.

If you’re looking to have your website redesigned, or you’re thinking of implementing a brand-new website, one of the best choices you could make for a web design company would be Up and Social, the premier web design company from Boston, MA. Specializing in social media marketing, superior web design, and implementation of the most effective SEO principles, Up and Social will make your new website the centerpiece of your organization, and a beacon to all those users you wish to attract.